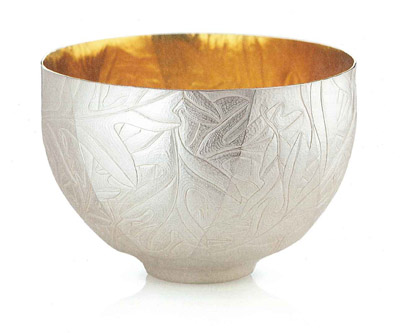 A small but exquisite exhibition is currently on view in the silver galleries at the V & A until July 7, 2013. Entitled “Twelve Vessels of Life, Love and Death” it showcases 12 individual silver cups, beakers and goblets of different shapes and sizes all made by silversmith Michael Lloyd.

The vessels are based around the twelve months of the year. Michael Lloyd invited 11 individuals to choose a month that was important to them for a personal reason.

The form and the decorative chasing of each vessel is a response both to each personal story and to the particular month. The patrons both individuals, couples and families – including the Duke of Buccleuch, Lord Cunliffe, John and Jenny Makepeace, and another eminent silversmith Malcolm Appleby – are all longstanding supporters of the silversmith.

Michael Lloyd explains: “The collection embraces my love of the natural world and our place, as part of nature, amongst it; a recognition not only of the beauty of nature, but of the profound events that mark our lives as we progress from cradle to grave, of birth, of love, of survival, of loss and of death.”

The project, from the initial conversations with the patrons, through the preparatory work of endless drawings – an element Michael believes is a fundamental necessity for a designer – to the hand-raising of the vessels themselves and culminating with the chasing of the decorative imagery took up to two years.

The result is a poetic dialogue in silver which perfectly illustrates and celebrates the commissioning process and how deeply fulfilling the exercise can be for both artist and patron. And on a deeper level, the vessels prove that silver objects are not simply luxury goods but have a far more meaningful and spiritual role to play in our lives.

Amanda Game, one of the patrons explains: “Like the Medieval Book of Hours, Twelve Vessels reminds us of the important relationship that exists between man and the natural world, through the uniquely eloquent medium of the carefully fashioned object.”

About Michael Lloyd
Michael Lloyd was born in Salisbury in 1950 and trained at the Birmingham School of Silversmithing and the Royal College of Art. He lives in Castle Douglas in Scotland and describes himself as a compulsive maker. His chased silver and gold vessels illustrate a profound understanding of and sympathy for both the material and the technique.

Michael works mainly to commission and his work reflects his love of nature and his appreciation of creativity. Major works include a bowl for Lord Porter, an offertory salver for Lichfield Cathedral, and a range of chapel furnishings for St Oswald’s Hospice. In 1999 he was commissioned to make the mace presented by HM The Queen to the New Scottish Parliament. Michael Lloyd is a Freeman of the Goldsmiths’ Company and a Fellow of the Arts Foundation.