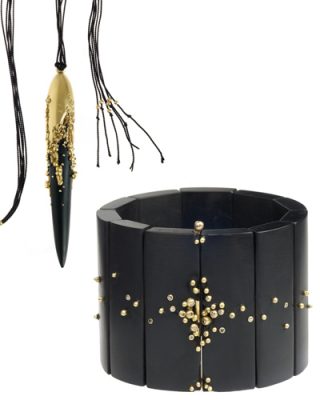 An exhibition of jewellery at the Galerie Elsa Vanier in Paris, Friday March 22 to Tuesday April 30, 2013. Supported by the Goldsmiths’ Company.

Galerie Elsa Vanier celebrates its 10th anniversary in 2013 with a unique showcase of ten foreign jewellers and silversmiths who have never previously been shown in France.

Un Printemps Anglais or ‘An English Spring’ focuses on ten exceptional artists from around the world who are all based in the UK where they’ve each developed distinctive, highly personal styles.

They’ve been specifically selected to demonstrate the diversity in style and talent that is characteristic of the thriving jewellery and silver design scene on the other side of the Channel.

From Jacqueline Cullen’s gothic statement jewellery made from pitch-black Whitby jet, to Rie Taniguchi’s exquisite silver figurines inspired by folktales and wildlife the wide variety of work on display is truly inspired.

Each of the participating artists has worked tirelessly to develop their own powerful, individual aesthetic resulting in signature work that appeals to avid collectors while remaining accessible to a more general audience.

This project is supported by the ‘Worshipful Company of Goldsmiths’, an institution created by Royal Charter in 1327, which has since been responsible for testing the quality of gold and silver (plus more recently platinum and palladium) sold in the UK.

Today the Company continues to play an important role in the support and development of the craft and industry of the goldsmith and silversmith.

Whether it be through funding schemes, training and apprenticeships, arranging commissions, competition and exhibitions the Goldsmiths’ Company continues to play a central role in the British fine jewellery and contemporary silver trade. (www.thegoldsmiths.co.uk)

Galerie Elsa Vanier was founded in 2003 by to showcase the artistic and cultural dimensions of designer jewellery crafted by artists who push the boundaries of design and use rare, precious, or fascinating materials to express their art.