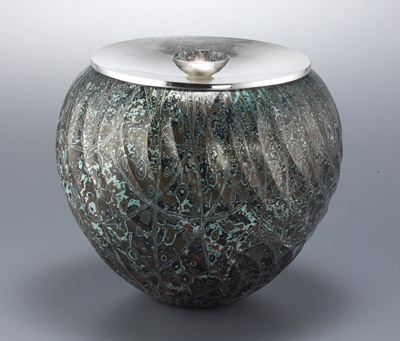 Silversmith Wayne Meeten, one of the 300 craftsmen featured on the Goldsmiths’ Company’s on-line directory www.whoswhoingoldandsilver.com, has recently been presented with two more awards to add to his growing list of public accolades.

Presented within days of each other, the first was The Balvenie Masters of Craft Awards for metalwork presented at The Connaught Hotel in London on Thursday June 2, and the second was the overall Grand Prize of the prestigious 2011 Saul Bell Design Award Competition, together with first prize in the Holloware category. The Saul Bell Design awards were presented on Saturday June 4 at a glittering ceremony in Las Vegas.

Organised by Rio Grande, one of the leading suppliers to the jewellery industry in North America, the award is now in its 11th year and is named after the founder of Rio Grande Saul Bell.

The award attracts an international audience and designs are submitted from craftsmen from not only throughout the United States but also from Europe, the United Kingdom, and the Far East. This is the second consecutive year that Wayne has won both the Grand Prize and the Holloware prize – in fact, he has now been invited to be a judge for next year’s exhibition so will be flying to New Mexico in 2012.

Wayne’s winning piece, a cylindrical lidded vessel, is called ‘Inner Golden Facets’ and is made of 32 layers of fine silver, and other gilding metals, a laborious and skilfully challenging technique called Mokume Gane (Japanese for wood grain). The inspiration for the vessel came from a trip Wayne made three years ago to the Grand Canyon in winter.

“The landscape was totally breathtaking” enthused Wayne, “With snow on the top of the canyon, together with dramatic layers of red rock, and black stone with all the hues of grey in between, it reminded me of the colours and effect achieved through mokume.” 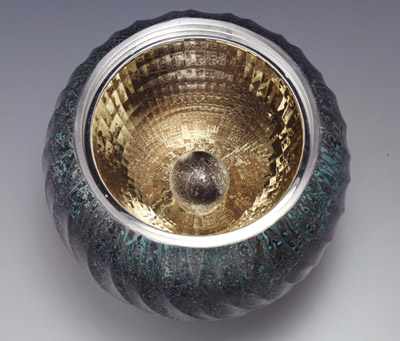 >Inside the vessel is a faceted gold bowl in the middle of which is a mokume ball, its rich colours reflecting outwards on the gold. The conceptual idea behind the design is that the mokume ball represents the world and the faceted gold bowl represents all of mankind. On a practical level, Wayne designed the piece as a container for chocolate truffles so the inside can be taken out and ice placed around the inner bowl – although it could equally be used for other delicacies.

The judges were unanimous in their decision to present Wayne with the much-coveted Saul Bell Design Award. They were particularly impressed with Wayne’s imaginative and lyrical piece and felt that the craftsmanship and design were outstanding. The judges almost couldn’t believe that Wayne had made it by hand.

Wayne’s designs are highly influenced by his love and passion of Tai Chi Chuan and Chi Kung movements, something he has practised for 20 years. He feels privileged and fortunate to have been taught by some of the leading craftsmen in the UK whilst studying at the Sir John Cass School of Art. Meeten also spent time studying in Japan at the sister college of the Royal College of Art, ‘The Tokyo Geidai’. Here he learnt the true way to make Mokume Gane.

Wayne will be using the funds from his prize money to buy gold with which he plans to make a new piece inspired by the Devon landscape where he now lives.