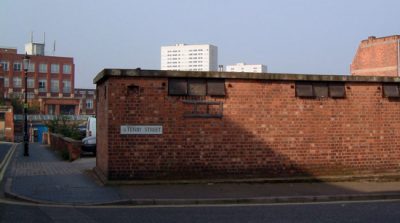 The policy of the Council seems to be that ‘if a sign goes ‘missing’ – just forget it!’ When The Orb was completed in Albion Street some years ago the Tenby Street road sign disappeared and this was reported whilst the developers were still on site.

(It was of course originally fastened to the wall of the old air-raid shelter but the new development is all glass. The Council were asked to replace the sign but they just kept making strange excuses and this has never happened.

As a result of a road accident a couple of weeks ago, the cast iron sign ‘Albion Street’ at the junction of Albion Street/Frederick Street has also now been ‘lost’ and the Council came along today and repaired the pavement with new paving blocks where the sign was fixed, so they obviously do not intend to replace the sign.

There is also a sign missing ‘Frederick Street’ which was broken near to the Clock. At this rate the Jewellery Quarter will soon have no road signs at all! (Claire at JQRP has taken on the job of trying to get these signs replaced).

There is a funny story about the ‘Albion Street’ road sign. Some years ago a guy dressed in a yellow jacket (to look like a Council worker) unscrewed the sign, put it in his car, and drove off. Sensing something a bit ‘fishy’ the Hockley Flyer office telephoned the Council and asked if they were repairing road signs or something.

They said ‘no’ so details were reported of the car number and a description of the man was reported to the police. Later, the police called at the guy’s house – he was an Albion fan and was about to repaint the sign in blue! He was very surprised to be caught, as you may guess, but that time we did get the sign back!