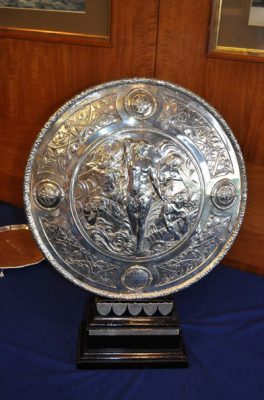 For four days in March, Steven Jordan, senior valuer at the Goldsmiths’ Company Assay Office, visited the prestigious Royal Thames Yacht Club in Knightsbridge to provide a professional valuation for their many silver trophies.

The club is the oldest continuously operating yacht club in the world and was founded in 1775. With well over 100 trophies all varying in size and style, Jack Edwards, member and Honorary Curator of the club’s trophies, believes that valuing these trophies was absolutely essential for two reasons. The first is that a detailed, itemised valuation means that the Royal Thames Yacht Club can keep track of all their trophies.

Secondly, if these trophies are properly insured, they are more confident in putting them on display and actually enjoying them at the many events and awards ceremonies hosted at the club.

The Royal Thames Yacht Club also occasionally loans trophies to other sailing organisations and clubs which again emphasises the importance of valuations for insurance purposes.

Historically, the club has only had these trophies valued once every 10 years but Steven recommends that they have them valued every three years which is appropriate given the ever increasing price of precious metals. 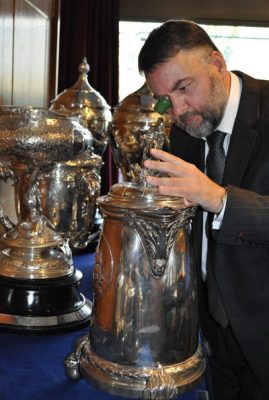 The Goldsmiths’ Company Assay Office runs regular professional valuation days at Goldsmiths’ Hall, in addition to secure drop off services and home visits. Steven, an experienced, independently regulated valuer carries out these valuations and each type of service includes an expert description and valuation of your item(s), a portfolio with detailed images, proof of ownership and registration on the secure e-register database.

In the age of the internet, the registration of personal belongings is quickly becoming more widespread as an increasing number of individuals and organisations recognise the added protection it provides. E-register already holds information on over £1,146 million worth of valuables and this is growing daily.

Steven comments, “From the vast majority of clients that I see, around 70% are currently under-insured. This demonstrates how the rapid changes in the precious metal and gemstone market are affecting people. We therefore need to ask, are we really protected by our insurance policies?”

However consumers can take steps to protect themselves by having a pre-loss valuation carried out to record details and replacement values for their precious items. Valuations provide proof of ownership which an insurance company may require in the event of a claim.

Without this proof consumers may find that replacement is based on an item of “average” quality rather than what they have actually lost. Having jewellery valued every 2-3 years will ensure any information about market values is up to date.

Steven Jordan FGA DGA FIRV was confirmed at the recent AGM of The Gemmological Association as member of the Council of Management. Steven is an independent consultant and Senior Valuer at the Goldsmiths Company Assay Office whose role is to act as a conduit between fellow valuers, retailers and Gem-A.

Steven, who in 2009 received the prestigious David Wilkins award from the NAG is a keen gemmologist who has been an active member of the jewellery industry since 1973. In 1993 he set up his independent valuation service and just over three years ago was offered the role of Senior Valuer at the Assay Office London.