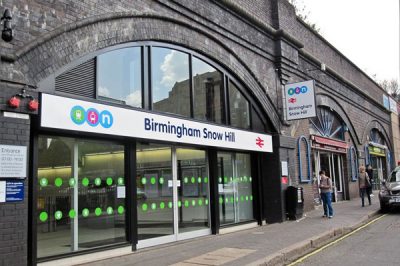 The Birmingham City Centre Extension will take Midland Metro from its current terminus at Snow Hill and extend it into the heart of the city to New Street Station.

Work is already well underway on the scheme with the completion of the Great Charles Street Bridge. The proposed route runs for 1.4 kilometres through Birmingham city centre with four new stops provided.

A new Snow Hill stop will be constructed on the existing railway viaduct at Livery Street/Lionel Street. This will provide interchange with national and local rail services at Snow Hill station by way of the new secondary access, and access to the neighbouring Ballymore development and those in the nearby Gun Quarter and Great Charles and Lionel Streets.

From Snow Hill, the route continues over the new Great Charles Street bridge, through the Ballymore Development then on street along Colmore Circus Queensway, into Bull Street before turning onto Corporation Street, across New Street and into Stephenson Street. A stop will be located on Stephenson Street providing interchange with New Street Gateway.

Routes have been tailored to meet the requirements of local authorities in helping achieve an integrated, long-term regeneration strategy. Developed in partnership with the private sector, the strategy helps to address competitiveness and build sustainable communities with Midland Metro being a key component in its achievement.

Expansion was a recommendation of the original Government Multi Modal Study. It is now an integral part of the Regional Spatial Strategy, LTP and Regional Transport Plan.

Congestion Relief – Based on figures for the modal transfer achieved for Line 1, almost eight million car journeys would be removed from the Midlands’ already congested roads each year.

Tram/Train – ‘We are looking at enhancing the case for future Metro through shared use of rail lines using ‘tram – trains’. Possibilities include the Wednesbury to Brierley Hill and Coventry to Nuneaton corridors. This imaginative use of ‘tram/train’ would not replace, but supplement current plans for Metro. Implementation may also facilitate introduction of a south/west to north/east freight corridor, unlocking freight capacity’.