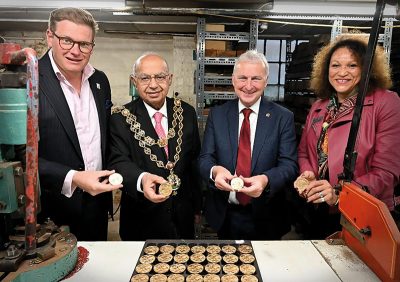 Two manufacturing businesses from the city are benefitting from an opportunity to support the council’s role in welcoming VIPs and dignitaries during the Birmingham 2022 Commonwealth Games.
Last year, designers, manufacturers and tradespeople were invited to enter a competition via a procurement process to supply the council with bespoke presentation items, which are traditionally offered by the Proud Host City to people such as Heads of State, dignitaries, representatives from sporting federations and businesses.

After judging a wide range of submissions, a panel featuring Council Leader Cllr Ian Ward, Chief Executive Deborah Cadman, and then-Lord Mayor Muhammad Afzal, selected the two concepts they felt best reflected the city of Birmingham – a council investment of £57,000 into local business in the process.

One was a Proud Host City coin, designed and manufactured by Deakin & Francis based in the Jewellery Quarter. The other was a Proud Host City bull statue, made by Digbeth-based A.E. Williams.
Deakin & Francis, founded in 1786 by Benjamin Woolfield, have over 230 years of heritage. As England’s oldest manufacturing jewellers, the Deakin & Francis factory remains in the same building today as it began in, dating back to the Industrial Revolution. Seven generations later, the business is now managed by brothers Henry and James Deakin.

Their coin has an intricate design, with one side showcasing a number of city landmarks including the Hall of Memory, the Sentinel ‘Spitfire Island’ artwork at Castle Vale, the Rotunda, and Library of Birmingham – with the other side displaying the city’s crest and motto ‘Forward’.

Renowned merchandising company Touch of Ginger won the second competition tender and appointed A.E. Williams, a renowned pewter item manufacturer, to manufacture the Proud Host City bull on their behalf.
Established in 1779 by Thomas Williams from his home on the Welsh border, making flatware and dishes, the business set up a base in Birmingham in 1840 to take advantage of the demand for pewter items, and by the early 20th Century was producing tea sets for the Ritz hotel in London.

In more recent times, the firm has produced props for films, television shows and major stage productions – and in 2010, a recreation of the Henry VIII Wine Fountain at Hampton Court Palace was unveiled. A.E. Williams are the only company, besides the Royal Mint, to make coinage for the Crown in over 500 years. Visitors use the coins to pay for a goblet of wine from the fountain.

Sat on a round base, the bull, complete with a ring through its nose, will be presented in a cylindrical presentation box to those in the privileged position of receiving one.

Cllr Ian Ward, Leader of Birmingham City Council, said: “The creation of presentation items for visiting dignitaries is yet another way the Commonwealth Games are about more than just the 11 days of sport taking place this summer.
“It has enabled this opportunity for us to support Birmingham’s businesses as we emerge from the COVID-19 pandemic – and show to the world what a creative and skilled place we are. The designs are bold and capture the essence of what our great city is all about.

“I’m sure these items will be well-received by everyone who is fortunate to get a coin or a bull, and they will help strengthen friendships and relationships with influential representatives of other nations and organisations in the years to come as we seek to solidify the legacy of being the Proud Host City of the Birmingham 2022 Commonwealth Games.”

Henry Deakin, Managing Director of Deakin & Francis, said: “We’re delighted that products made here in Birmingham will be travelling all over the world after the Games. The fact they’ve got the Deakin & Francis stamp on them is great as it will get our name out into the public a bit more.”

Stephen Johnson, Director at A.E. Williams, added: “We were delighted to be given the opportunity to manufacture the Proud Host City bull. As a company we have a rich history of working with prestigious and high-profile organisations but knowing that this item will be directly promoting our home city of Birmingham to people all over the world is an amazing honour and privilege.”