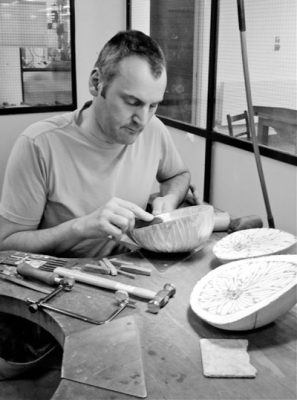 At work on making ‘Filiere’ and the final work which can be seen at the Museum of the Jewellery Quarter now.

The latest addition to Birmingham Museum & Art Gallery’s (BMAG silver collection is on show at the Jewellery Quarter Museum. As the centre piece to the exhibition ‘Jewellery Quarter Silver’ the work ‘Filiere’ has been made by silversmith Kevin Grey.

Kevin received the commission after entering a competition for makers to propose works inspired by the Jewellery Quarter. ‘Filiere’ takes its design cues from unique elements of the Quarter, the reflective tile finishes on brick facades and pew 23 where Matthew Boulton worshipped in St Paul’s Church.

The commission has been made possible through a partnership between BMAG, Birmingham Assay Office and Birmingham School of Jewellery.

His piece is titled ‘Filiere’ and interprets specific aspects of the Jewellery Quarter that contribute to its uniqueness as a place: the contrasts; its strong boundaries the transformation of materials and the impact of individuals on making and designing.

The proposed piece consists of two bowls, an inner and outer each formed of many strips, with a single band of silver forming the top edge and joining the bowls together’

Kevin is a relative newcomer to the silversmithing trade – having retrained at Birmingham’s world renowned School of Jewellery after 25 years in the automotive industry. As a sheet metal worker he worked on Rolls Royce, Bentleys and Morgan Motor Company in Worcestershire.

Utilizing the skills and knowledge that he acquired during this time – with new skills and a chance to explore the creative use of silver he has developed a unique approach to making. Using strips of silver combined with raised smooth forms he constructs 3-dimensional forms that have an appearance of solidity – his work almost exclusively uses TIG and laser welding. 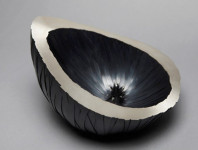 On completion of his course at BSJ he picked up a couple of awards that were to indicate the pattern to come over the next 12 months. Invited to become one of the Artists’ in Residence at the school he has been able to develop his approach to making. In March 2010 he was awarded the prestigious Goldsmiths’ Company Award at the Design & Crafts Council Awards.

Later in 2010 he won the Jewellery Quarter commission and was selected as one of about 20 makers from across the country to participate in ‘Silverstruck’ an exhibition curated for Ruthin Craft Centre and National Museum Wales showcasing the best of new British silver.

To win both of these awards so early in his career has been a rewarding outcomes for Kevin after taking the plunge and committing to a change of career. The Goldsmiths’ Award was particularly meaningful as it is judged by other silversmiths but to then be invited to make a piece of work for one of the country’s leading public silver collections has affirmed the level of interest in his work.

The interest continues this year with his participation in British Silver Week where his work has been selected as part of the Rising Stars exhibition at the Pangolin Gallery in London on the 12 May 2011.