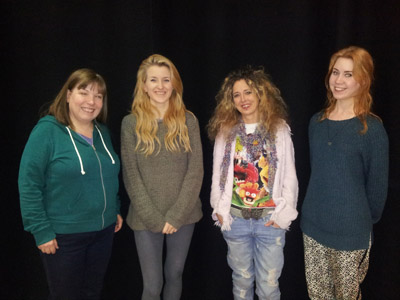 The Blue Orange Writers group, or BOW for short, is celebrating its 1st birthday. Since its inception last year it has presented two rehearsed readings under the titles of ‘Culture Shock’ and ‘Shorts’.

It was decided to hold a competition for longer plays and to showcase an all female cast. And so ‘A Female Perspective’ was born.

The competition prize was for three plays to be given a full production as part of the Blue Orange Theatre Season.

The three plays chosen for production are: A Stab in the Dark by Richard Price – A young woman’s boyfriend has been stabbed and killed. There is no motive and no other witnesses apart from the girlfriend. Who’s guilty?

Black Hole by Michael Edan – How much suffering can a friendship endure? What opens the heart to allow forgiveness? Two women. Two sons. An explosion of bullets in a high school cafeteria ending in five deaths. A year and a half later one woman dares to visit the other and ask for what seems impossible to give.

Cradle Days by Henry Nolan – Mum’s going into a home and so her daughters and grand-daughter help out with the clearing of the house and in the process uncover forgotten secrets and heart-ache.