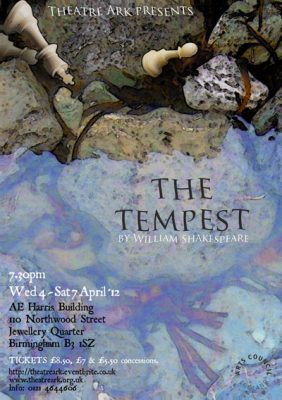 A groundbreaking theatre group run by young people from across Birmingham is to bring Shakespeare to life when they stage a performance of The Tempest in a disused factory building.

Theatre Ark is a company of 20 young members aged 14-20 who are developing the skills to run their own theatre company.

Its aim is to forge a new learning route into employment, through developing skilled and experienced young artists and arts managers with an independent voice on the city’s art scene. They are supported by theatre professionals who develop opportunities for creative management and administration, in balance with a firm perspective on presenting the experience of young people in the city through high quality arts products.

The company has based itself in the city’s most exciting and challenging venue – the A.E. Harris Warehouse in the Jewellery Quarter – and makes innovative use of space to create exciting theatre and film events.

Theatre Ark is working on the second stage of a year-long project called The Name of Action. This follows an exciting and acclaimed series of experimental films using Shakespeare texts to explore the fears, frustrations and aspirations of young people in Birmingham, and the contradictory forces shaping the city’s next generation in the aftermath of the riots.

The company intends that the second stage of the project – its bold and immersive theatre production of Shakespeare’s The Tempest – will further employ the Bard’s language and imagery, in combination with its own energy and distinctive approach, to resonate with the lives and experiences of today’s young audiences.

The Tempest is commonly acknowledged as Shakespeare’s last play and is infused with the myths and realities of an ever-expanding, far-flung world at the turn of the 17th Century. It deals with themes of mastery and servitude, devotion and treachery, love and loathing.

Prospero, usurped Duke of Milan and self-taught sorcerer, conjures the forces of nature and the island’s spirits in order to manipulate his enemies, friends and family alike and bend them to his greater purpose. But is that purpose revenge or redemption? And what will be its resolution?

Arts Council funding has enabled the company to realize its aspiration to take on its first young employees, one as a part-time Theatre Project Assistant and the other as a Creative Apprentice.

The company is planning the next stage of its growth and looking forward to building on its achievements with the support of local people, and in particular the business community. If you would like to support Theatre Ark’s development the company warmly welcomes offers of training, advice, contacts and sponsorship. “Watch out for Theatre Ark because this is an example of Birmingham’s future which we should all try to support. If ever there’s a group to watch it’s these youngsters.” – Steve McCabe, MP.

The Tempest is on at AE Harris Warehouse on Wed 4th – Sat 7th April. Tickets for The Tempest are £5.50 – £8.50 and can be booked at http://theatreark.eventbrite.co.uk