Home » Heritage » A Grand Day Out 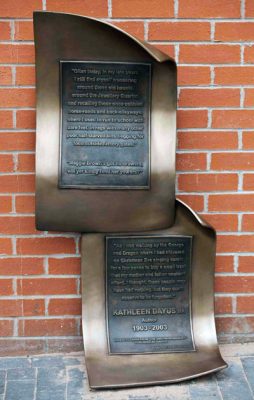 On 12th March at 12 noon, a small but enthusiastic crowd gathered in the brand new ‘Dayus Square’ in Birmingham’s Jewellery Quarter.

Dayus Square (junction Albion Street/Carver Street/Legge Lane) has been created to commemorate Kathleen Dayus (born in 1903) who was the author of a series of books about her life, living and working in the slums of Hockley in the early 1900’s.

Kath’s first book was ‘Her People’, (which won the J.R. Ackerly Prize for autobiography (1982), then followed ‘Where There’s Life’, All My Days and ‘The Best of Times’. Kath was awarded an honorary Master of Arts degree by the University of Birmingham in 1992.

Kath, and her daughter Jean Rainey, re-visited Hockley many times in later years and became firm friends with Doug Timmis (former Manager of Barclays Bank and founder director/Treasurer of The Jewellery Quarter Association).

At one time Kath teamed up with Ron ‘Smudge’ Smith (Local Artist and Author – ‘A Paddle in Hockley Brook’ being one of his books) and Marie Haddleton (Author of ‘The History & Guide to The Jewellery Quarter – Issues 1 and 2) to sign their books and give talks at various venues, including the Jewellery Quarter Museum, (all arranged by Doug). 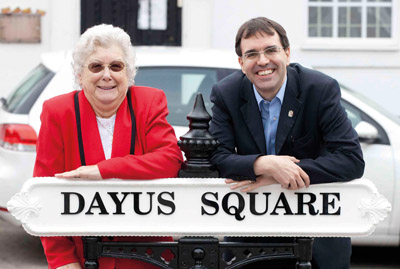 One particularly memorable evening was the ‘Millennium Evening of Nostalgia’, which was held in the Lecture Theatre at the School of Jewellery – this was arranged by Doug Timmis to celebrate the approach to a new Millennium, the Centenary of Birmingham Settlement, and the 10th Anniversary of the JQA.

Professor Carl Chinn was MOC and he introduced Sir Adrian Cadbury, Ron ‘Smudge’ Smith and Kathleen Dayus, who all said ‘a few words’ and were presented with flowers by the JQA Chairman The Rt Hon Prof. Freddie Troman. Kath was also present during the day when hundreds of balloons were released by the Clock, all broadcast live with Sue Beardsmore (BBC Midlands Today).

On one visit Kath suddenly noticed some railings across the windows of Boddenham & Shorthouse (Legge Lane) – she darted across the road shouting excitedly: “The railings are still there – it’s where the workmen used to put crusts and apple cores etc. on the spikes, for us hungry kids to eat as a treat!” 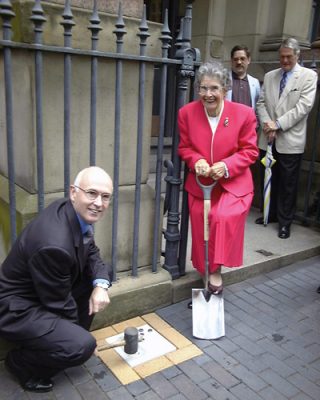 Kath ‘unveiling’ part of the Pavement Trail outside the Birmingham Assay office.

Kath also ‘unveiled’ the piece of ‘pavement trail’ outside The Assay Office.

Doug and Marie, amongst others, arranged for a fun day for Kath’s 100th birthday, but sadly she died just before the big day.

There was some ‘Section 106’ money available from a nearby development and it was agreed that this should be spent on a memorial plaque for this much-loved character, and also to upgrade the area around the George & Dragon and Camden Street schoolrooms by resurfacing the area and providing a bench and planting a tree (probably the first tree to be planted in the area for 30 years!)

The George & Dragon has been derelict for many years but the latest good news is that the refurbishment of the pub itself and the redevelopment of adjoining buildings (which already has planning permission) will shortly be carried out.

A meeting took place between The Jewellery Quarter Association The JQ Neighbourhood Forum, Doug Timmis and Mark Gamble (BCC Project Officer) to look at various sculpture designs and it was decided that the work of Peter Walker A.R.B.S. A.R.B.S.A. was the most appropriate. Wording from Kath’s books are inscribed on the artwork which represents the cascading leafs of a book. 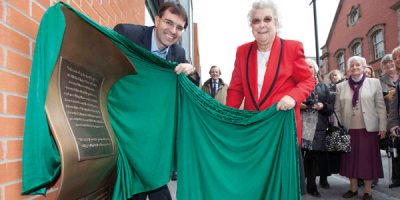 Marie Haddleton (Hon President of The Jewellery Quarter Association) was invited to open proceedings and she then handed over the unveiling to Cllr Tim Huxtable Cabinet Member for Transport, Environment and Regeneration) who said: “This project will not only enhance the quality of life and the street scene in the immediate vicinity, but will also further enhance and celebrate the cultural heritage which makes the Jewellery Quarter such a unique and renowned attraction.” 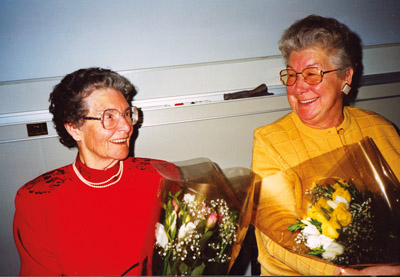 Kath and daughter Jean looking pleased with their flowers at the Millennium Evening of Nostalgia.

Jean was accompanied by two of Kath’s granddaughters (one had inspired Kath to use her diaries and notes to write her first book). Unfortunately, one granddaughter was unable to attend, but was represented by another member of the family.

Marie presented all four ladies with a solid silver hallmarked bookmark, including the special Hallmark for the Queen’s Diamond Jubilee. The bookmarks were donated by The Jewellery Quarter Association.

In the future it is planned to provide a Kathleen Dayus Trail through the Quarter to places mentioned in her books, ending at Spencer Point. This is the idea of Dave Mahony (previous Chairman of The Jewellery Quarter Association).

Kath herself would have enjoyed this ‘Grand Day Out’ but her family certainly appreciated it and stayed drinking coffee outside Fredericks until late afternoon, enjoying the unusually warm sunshine for mid-March.

These events cannot take place without the support of lots of people and I will try to remember everyone.

Sadly Prof. Carl Chinn had to send his apologies as he couldn’t attend this event.