Home » Local News » Antiques for Everyone a Huge Success 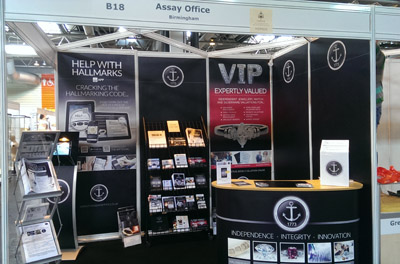 The Assay Office Birmingham had a fantastic four days at Clarion Events Antiques for Everyone Fair at the NEC in Birmingham between April 10th and April 13th. The fairs are held three times a year and are Britain’s largest antiques fairs.

Penny Parkes, Craig O’Donnell, Sally Hoban, Marion Wilson, and Kelly Fisher were on hand to welcome visitors to the stand and to speak to new and existing customers about their range of products and services which are available to professional traders and canny collectors.

They also met some antiques celebrities who were delighted to hear about the new Help with Hallmarks App!

Many visitors to the stand asked about the Silver Collection public visits. These are some of the last chances to see Assay Office Birmingham’s historic silver collection and library before they move to the new building in 2015.

The visits have been so popular that they have added additional dates and took bookings at the fair from people who will be travelling from all over the country to visit Assay Office Birmingham. The dates are 16th June, 26th June, 21st August, 23rd October, and 4th December. To book a place call 0871 871 6020 or email

Craig O’Donnell talked to many visitors about historic Hallmarking and answered their questions and was also on hand to talk about the new VIP valuation service and regular valuation days and also to speak to visitors who have been on the training courses and are looking to book more.

Assay Office Birmingham’s one-day and half-day courses are focused, intensive, and practical and are suitable for those in the jewellery, heritage, antiques and auctioneering industries, and private collectors and enthusiasts.

Craig and Penny visited silver dealer Michael Baggott and had a look at one of the star pieces at the fair – an American colonial Marrow spoon priced at £160,000.

The spoon, which was used for removing bone marrow, dates from 1766-68 and was made by Daniel Henchman/Nathaniel Hurd of Boston. It is thought to be the most valuable spoon of its type and was originally owned by John Wentworth (1737-1820), who was Governor of New Hampshire from 1766 until the American War of Independence.

The ‘Help with Hallmarks App’ proved to be extremely popular with visitors, including Mark Hill, whose stand was adjacent. Mark is an author, publisher, TV presenter, and the leading specialist dealer in post-war Czechoslovakian glass.

Mark is an expert on BBC Antiques Road-show, but has been seen most recently on our screens co-presenting Collectaholics with Mel Giedroyc, comedienne and star of the BBC’s hit series The Great British Bake Off. Mark was also speaking in the Celebrity Talks area of the fair along with Judith Miller giving hints and tips on collecting antiques.

Will Farmer from Fielding’s Auctioneers in Stourbridge and BBC Antiques Road-show also visited the stand, as did Eric Knowles, who can also be seen regularly as a long-standing expert on the Road-show.

Visitors were invited to ask when the Assay Office Birmingham was founded (1773), for a chance to be entered into a prize draw to win a bottle of champagne. Anne East from Sutton Coldfield was the winner and she will be presented with her prize when she comes on one of the public Silver Visits in June.