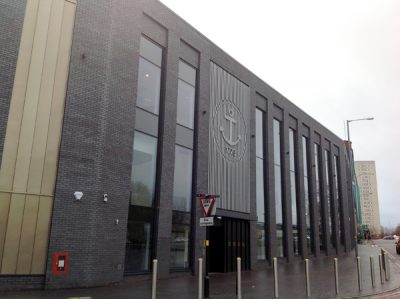 The Birmingham Assay Office invited people from the Trade to attend a meeting to discuss their concerns over hallmarking in Mumbai using the Anchor mark.

The meeting demonstrated the wealth of knowledge, enthusiasm and pride in the Birmingham jewellery trade which Assay Office Birmingham is incredibly proud to be part of. Over 40 customers attended with views ranging from understanding and support, through reluctant acceptance to complete opposition.

Stella Layton explained the circumstances driving the Assay Office’s decision to open a Sub office in India which will strike the anchor hallmark on articles prior to export.

A combination of changes in the supply chain and legislation mean that approximately 95% of all jewellery sold in the UK is made abroad. Due to legislative changes in 1999 all articles marked in the UK are now marked with UK town marks regardless of their place of manufacture.

There is fierce competition from London and Edinburgh Assay Offices who are both striking their town marks as imports arrive at Heathrow, as well as from other European Assay Offices whose marks are recognised by the UK. This, added to the massive drop in hallmarking volumes over the last decade, has forced the Birmingham Assay Office to continue to be competitive, diversify and respond to the changing market in order to survive.

The anchor hallmark is clearly close to the hearts of Birmingham manufacturers who are justifiably proud of the heritage, established reputation and abundance of skills and creativity in the Quarter. There was much discussion around the fact that to them, and to some consumers, the anchor means Birmingham and they claim some ownership of it although in fact it has not been exclusive to Birmingham since 1854.

There has always been disquiet about the loss of the import mark in 1998, which was opposed strongly by the assay offices at the time. However, the legislation was passed and the Assay Offices have no option but to comply. The meeting agreed that an alternative way to identify items made in the UK would be a good way forward.

Stella asked that customers continue to talk and work with the Assay Office to seek a way forward on this important issue which affects the entire trade, including all four of the UK Assay Offices – not just the Assay Office Birmingham.

The following actions were agreed;
The issue was reconsidered by the British Hallmarking Council on Friday 15th April as they had been approached by the objectors for an opinion.

A written response confirmed that Birmingham Assay Office were acting within current legislation and advised that the BHC considered some of the objections to be based on a “fundamental misunderstanding of the statutory hallmarking regime.” Others “related to specific business interests”. The BHC sympathises with the challenges Birmingham based businesses are facing but “cannot lawfully consider such matters in making decisions relating to statutory hallmarking”. The council recommended jewellers to contact the NAJ for support in finding an alternative solution.
The Assay Office has issued an online survey for attendees at the meeting to record individual views as not all are comfortable contributing in a large forum. The closing date for replies is Monday 16th May.

Michael Rawlinson CEO of the National Association of Jewellers (NAJ) was present and committed to: