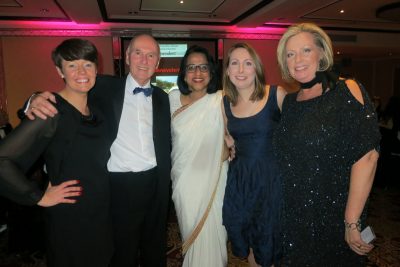 The enthusiasm, creativity, and passion of Birmingham’s Jewellery Industry was celebrated on 5th December at the British Jewellers’ Association Member Awards at St John’s Hotel, Solihull. The event was part of the annual Charity Ball in aid of the British Jewellery Giftware & Finishing Federation Benevolent Society.

The Birmingham Assay Office supported the event in style and was delighted to see its customers winning almost every award. Jewellery Quarter based companies Weston Beamor and Cooksongold won BJA Member of the Year and Supplier of the Year respectively, and Redditch based TV and internet jewellery specialists, The Genuine Gemstone Company, won Retailer of the Year. Designer of the Year winner Andrew Geoghegan, based in North Yorkshire, is also a customer.

Business Development Manager for the Birmingham Assay Office Marie Brennan said, “It has been a brilliant night for Birmingham. BJA members from around the country can nominate and vote for the winners of the Awards. Tonight’s results demonstrate that the Midlands and The Birmingham Assay Office are at the heart of the UK jewellery industry and there is great recognition and respect for their creativity and professionalism throughout the trade.”

There was further cause for celebration for The Birmingham Assay Office when Michael Allchin, Chief Executive, and Assay Master, was presented with the BJA’s Lifetime Achievement Award. The honour, which is awarded at the discretion of Members of the BJA’s National Committee, was presented by Patrick Fuller, former Chairman of the BJA, and a former Warden of The Birmingham Assay Office.

Patrick made a moving tribute to Michael and said that there were few people in the jewellery industry with the breadth of knowledge and experience of Michael Allchin.

Patrick went on to say that Michael’s contribution has stretched far beyond the confines of The Birmingham Assay Office. His analysis of current trends pulls a crowd to every Trade Event!, so too his brainchild “The Great Debate” at IJL which reflects his commitment to addressing ethical issues.

After Patrick’s moving tribute, Richard Peplow took to the podium and on behalf of Gaetano Cavalieri, President of CIBJO, who was unable to be there personally, Richard thanked Michael for the tireless contribution he had made to CIBJO over many years and particularly since his appointment as the President of CIBJO’s Precious Metal Sector where Michael had been instrumental in writing and publishing its ‘Blue Book’.

Richard thanked Michael on behalf of CIBJO for the amazing contribution he had made to the work of the organisation.