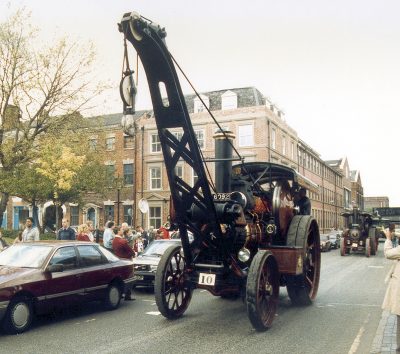 Following up on the story in the December issue about the Blue Plaque being unveiled on 27th March (his house is embedded in the premises of Deakin & Francis in Regent Place), we thought how exciting it would be to have a steam traction engine present at this important event.

A lot of you will remember ‘Busy Bee’ the small traction engine which belonged to the Science Museum which used to visit The Jewellery Quarter often and was always present at our Festivals. We enlisted help to track it down and Su Booth from The Museum of The Jewellery Quarter was successful.

Apparently at the moment it is still at the Science Museum but it will be moved into storage soon. It will be running eventually and managed by Think Tank. It is however off the road as it needs some work doing to the boiler before it can get a new ‘boiler ticket’ and insurance. Also the driver is off sick, so all in all it won’t be available for the March event.

However, in the meantime, Birmingham Civic Society have managed to arrange for a ‘steam crane’ to be present (hold on to your eardrums if it blows its whistle!) It is therefore likely that the steam crane shown in this picture taken in St Paul’s Square at one of the long lamented ‘Steam Fairs’ will be visiting us again in March.