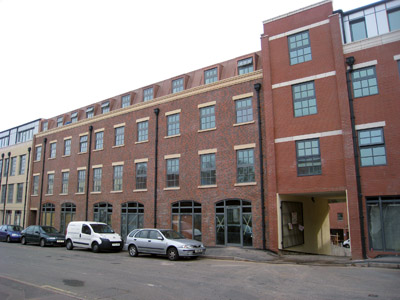 Kenyon Forge, located behind the College of Law on Kenyon Street is a new build development comprising eighty apartments and twenty four commercial units. Completion is imminent and the agents Maguire Jackson are reporting strong interest already in the business units from those in the jewellery trade.

“The combination of units with sizes varying from 525 sq ft to 1101 sq ft are located within easy walking distance of Warstone Lane, each with parking, plus half of them are overlooking the courtyard behind secure electric gates rather than having a street frontage, and this is proving to be a winning formula,” said Philip Jackson the agent.

Developed by New Manor Developments who previously developed the popular Jewellery Quarter located Boxworks apartments and business units Kenyon Forge has continued to take shape over the past twelve months as many competing schemes in the City Centre have been moth balled.

The apartments will be launched in the New Year but the commercial units are available now in shell or finished form, to let or for sale on long leaseholds. The units can be connected vertically or horizontally in order provide larger units if needed. “The prices are very competitive in today’s market,” said the agent. www.maguirejackson.com

Previous: Palladium Badge of Office
Next: Christmas in the Jewellery Quarter