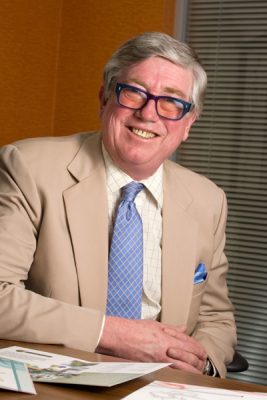 Patrick Fuller, Chairman of WB The Creative Jewellery Group is a popular, regular, speaker at ‘Getting Started’ the Goldsmiths’ Company’s annual, week-long training event which took place in January at Goldsmiths’ Centre in London.

During his presentation entitled simply ‘Careers in Jewellery’ Fuller was keen to point out that a degree in jewellery design can open many doors other than self-employment.

He challenged his audience of recent design graduates to ‘enter the confessional’ and be completely honest with themselves about their strengths and weaknesses before deciding what direction their career should take.

Fuller, who employs some 180 people – 50 of whom are graduates – in Birmingham, London, and Witham, said he felt that some graduates do not fully understand the industry they are entering, nor do they understand the commercial realities of working as a designer maker or the financial cost of being self-employed.

He strongly urged those present to gain experience by working for somebody else before starting out on their own. “You may need two jobs to keep your head above water in the early days and don’t get fussy about doing jewellery repairs, they can pay the rent,” he said.

He also spoke of the opportunities that exist within the jewellery industry for graduates willing to work in sales and marketing, manufacturing, CAD and rapid prototyping, business administration and export to say nothing of design and new product development. “Thirty four of the graduates in our company do not have jewellery specific degrees, their jobs could potentially have been yours,” he said.

Francesca Flynn, who studied at Glasgow School of Art, where she is now on an Art Residency Programme was in the audience. In an ideal world Flynn (www.francescaflynn.tumblr.com) would like to run her own business, but says that Fuller’s talk made her think.

“He seemed genuinely interested in everyone present and made me realise that there are a whole range of other things I could potentially do. I shall definitely try to get experience working for someone else and am already thinking about where my strengths lie so I can take those into account when planning my future,” she commented.

“I think some people were a bit depressed by what he said, because most of us really want to run their own businesses. But I’m half Italian and half German and I speak English so I have three languages and I think I would enjoy going abroad and representing a company at overseas exhibitions, which wasn’t something I had previously considered. With the economy the way it is now everyone needs a job and he showed us a lot of different angles,” said Alexandra Tosto, who trained at The Cass and already has her own fledgling business www.alexandratostodesign.co.uk.

Alice Welsh www.alicewelsh.com, who is currently gaining some work experience in Brighton before going to Frankfurt to do an internship with a German producer, thought the talk was ‘brilliant, really good, really inspirational it showed us all the avenues you can go into and also what a big industry this is employing lots of different types of talented people,” she said.

“He was basically saying that the trade side of the business is not for everyone and that we are not all cut out to be successful business people. It was uplifting and made me realise you have to be honest with yourself and think about possible routes to progress. I also saw that there are a whole range of other things I could potentially do,” says Masege Sankowski, a polish trained goldsmith with a degree from Glasgow School of Art

“Patrick is an engaging speaker with wide experience of the global jewellery industry and his talk certainly provided a realistic picture of the various career opportunities it offers. The whole point of Getting Started is to assist participants in finding gainful employment/self employment in the craft and industry and, as Patrick demonstrated, there are many different ways in which this can be achieved,” said Peter Taylor, Director of The Goldsmiths’ Centre.

Fuller said: “CBI figures show us that less than 50% of start-up businesses are still going three years later and growing a successful company as a designer maker isn’t going to be for everyone. I hope I have opened their eyes to the many other opportunities that are available to them elsewhere in our industry, where their education, skills, and talents are very much needed.”