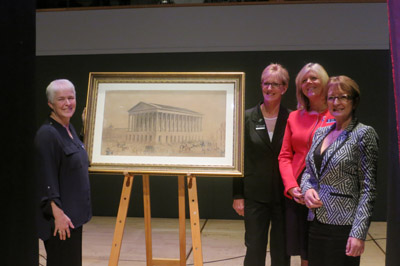 An original artist’s impression of this iconic city landmark is to go on public display for the first time. The painting captures the grand civic aspirations of the 1830s Birmingham, with culture and politics at its heart.

The watercolour, by W Harris, dates to 1831 and is the artist’s impression which accompanied the winning competition entry by architects Joseph Hansom (later the inventor of the Hansom Cab) and Edward Welch.

It has been loaned to Town Hall Birmingham for permanent display by Assay Office Birmingham.

As well as illustrating the design of the proposed Town Hall, the artist’s impression goes further, envisioning the architects’ ideas for a series of imposing surrounding buildings reflective of the grand aspirations of Birmingham’s Street Commissioners (the forerunners of the town’s council).

No known records have survived concerning the acquisition of the painting in Assay Office Birmingham’s collection, however, investigation by Dr Sally Hoban (who, until recently, worked at Assay Office in heritage and education) has revealed that there were links between the early days of Town Hall and Assay Office, which was founded in 1773. She explains:

“My research suggests that the painting possibly came to the Assay Office through William Phipson, who was Assay Master between 1808 and 1845. He was a member of the First Town Hall Committee in 1828 and of the 16 men who were part of this committee, nine were Guardians of the Assay Office, so there were close links between Town Hall and the Assay Office at this time.” 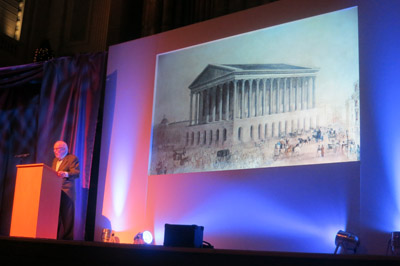 Town Hall Birmingham was built in 1834 and is believed to be the oldest surviving concert hall of its size in the world. It was intended as both a fitting venue for the renowned Triennial Musical Festivals as well as to serve ‘the general purposes of a Town Hall.

Speaking at an unveiling event at Town Hall, Professor Peter Marsh (Honorary Professor of History, University of Birmingham), explained: “This watercolour expresses the civic vision of the leaders of Birmingham long ago when it was bursting onto the economic and social landscape of England but still lacked recognition in the governance of the country.

The leaders of Birmingham in the 1830s wanted to stake out a two-fold claim for their town: that it was a cultural centre of European distinction and was, at the same time, eager to set the pace of political reform in Britain.”

That vision was revived and redrawn in the 1870s by Joseph Chamberlain, and again with the renovation of Town Hall prior to its re-opening in 2007, and this is a continuing process,” said Professor Marsh: “Every generation must rediscover its own civic vision and develop it to meet its aspirations.” He concluded with a challenge to Birmingham’s rising generation: “What would you like to see this city become; what quality of life would you like to see here; how can we carry forward the vision embodied in this building of a socially unified city with a vibrant culture?” 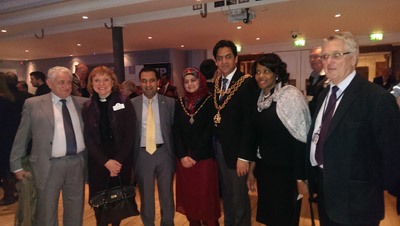 Kate Hartigan, Chairman at Assay Office Birmingham, said: “We are immensely proud of Assay Office Birmingham’s heritage within the city and our extensive silver collection, library and archive is open to the public during specially organised visits; but we wanted far more people to be able to see the painting of the Town Hall and so we are delighted that the painting is going ‘home’.”

Anita Bhalla, Chairman of Performances Birmingham Limited, the registered charity that manages Town Hall and Symphony Hall said: “This unique artwork represents the grand plans of the city fathers which put culture at the heart of their civic vision.

Town Hall remains an iconic landmark at the centre of Birmingham’s cultural and social scene and continues to be a favoured venue for major speeches and announcements by politicians and business leaders. Now, thanks to the generosity of Assay Office Birmingham, and the support of the Limoges Trust, this illustration of civic pride has a permanent place at Town Hall.”

The painting has been framed and a perfect facsimile made with support from the Limoges Trust. The original will be placed in Town Hall’s Joseph Hansom Suite where it can be viewed during public tours, which are sponsored by History West Midlands, with the facsimile on public view in the foyer.
A short film by History West Midlands about the artist’s impression of Town Hall Birmingham has been made to commemorate the occasion and can be viewed at www.historywm.com