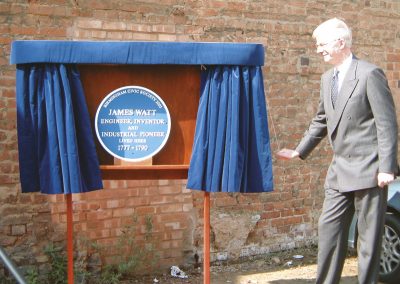 A Blue Plaque was unveiled on 27 March to commemorate the fact that James Watt lived for many years in a house in Regent Place in The Jewellery Quarter.

Although many of us knew that the passageway between Warstone Lane and Regent Place ran through James Watt’s garden, few of us knew where his house was. Part of his house is clearly visible at the rear of Deakin & Francis’ premises in Regent Place. 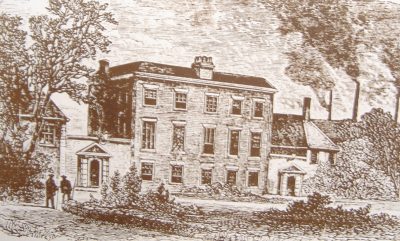 The guests then made their way to the Birmingham Assay Office at the invitation of the Assay Master Mr Michael Allchin where a Presentation on the life of James Watt was given by Dr J Andrew, C.Eng. M.I.Mech.E and a very enjoyable buffet lunch was served.

The weather behaved beautifully and a pleasant time was had by all.

Extract from Smile’s book ‘Boulton & Watt’:
On the occasion of Watt’s second marriage – Boulton had taken a house on Harpers Hill which was in readiness for the reception of the family on their arrival about the end of August 1775 – ‘Regents Place’ Harpers Hill was then the nearest house to Soho on that side of Birmingham.

It was a double house, substantially built in brick with stone facings, standing in the outskirts of the town, surrounded by fields and gardens. Marshall gives date of Watt’s second marriage as 1776.’

Extract from ‘James Watt’
By T. Edgar Pemberton, 1905
He (James Watt) took a house at Harpers Hill, Birmingham. The house has gone now and its neighbourhood is altogether altered. It was between Regents Place, the North end of Newhall Street and West end of James Street.

There is a plan of ‘Harpers Hill House’ presented to the Reference Library Boulton & Watt Collection by the Birmingham Antiquarian Society, December 20 1919. It is drawn in ink on paper and shows the entrance gate in James Street (corner of Northwood Street), with a wide sweep of drive leading to the house. The house is shown backing onto Regent Street. It may be that originally the Street was called Regent Street, and the house ‘Regents Place’, as stated in Smiles ‘Boulton & Watt’.

The Street is undoubtedly Regent Place on account of its narrowness and the bend at Caroline Street end which is clearly shown on the plan and brings the end almost parallel with Northwood Street.

The house is approximately 100 feet long and part of it must have been on the site of Zimmerman’s (now Blackensee’s Works).
In the Boulton & Watt Museum there is an article cut from the Birmingham Mail, January 4th 1886, which says that ‘The house in Harper’s Hill (between Regent Place and Northwood Street) was then recently pulled down. 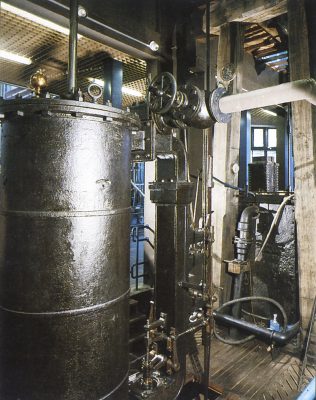 The Smethwick Engine of 1779 to James Watt’s design.

Part of it may have been, but the Caretakers House at Deakin & Francis Ltd premises, 17 Regent Place, is undoubtedly a portion of the original house. It corresponds in appearance exactly with the illustration in Smiles ‘Boulton & Watt’. Note in particular the peculiar pitch of the roof and spacing of windows and its position in relation to the end of James Street as shown in the map.

Harper’s Hill appears to have been a District not a Street or thoroughfare. In 1820 Harper’s Hill was partly demolished. The land changed hands (deed in Library) and re-named (part of it) Vittoria Street.

James Watt resided at ‘Regents Place’ Harpers Hill 1775-1790, when he left and took up residence at ‘Heathfield Hall’. He left Regents Place as it was gradually being built up and encroached upon.

Much of his most important work was accomplished between the years 1775-1790 whilst residing at Regents Place. There were two children of his second marriage, both dying in infancy (probably at Regents Place).

The celebrated ‘Lunar Society’ which met at the period of the full moon, in rotation at the various members’ houses, probably met occasionally at ‘Regents Place’. The Society included such names as Priestly, Galton, Erasmus, Darwin, Boulton, Watt, Wilkinson and many others.

Conditions of sale of Freehold Premises at Harpers Hill

Sold by auction at the ‘Turks Head Tavern’ Livery Street on Wednesday 3rd January 1828 in the following lots:

Lot 2: Two Genteel Houses in Cottage style with short distance from Vittoria Street fronting the grounds of Mount Zion Chapel, having convenient out offices, yard, Party Pump attached thereto and now of late in the occupation of Messrs. Tongue & Small.

Lot 3: Three other Genteel Dwelling Houses near to the last Lot with garden in front of each house and yard, party pump and suitable offices behind the same.
When we had a proper Museum of Science & Industry in Newhall Street, James Watts projects were a big feature. The lower two floors of the James Watt Building were dominated by the Smethwick Engine which was erected in 1779 to James Watts design. The engine pumped water back up the canal locks at Smethwick until 1891 and was preserved by the Canal Company until it was presented to the Museum in 1959.

Also, of particular interest to Watt was the development of the first commercial process for copying drawings and documents.