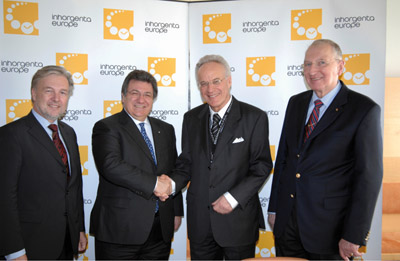 inhorgenta europe, the largest trade fair for watches, clocks, jewellery, precious stones, pearls and technology in the EU, and the World Jewellery Confederation (CIBJO), the international association of national federations of the jewellery industry, are entering into a partnership.

Parallel to the Munich industry get-together, Hans-Joachim Heusler, Managing Director of Messe München GmbH, and Dr. Gaetano Cavalieri, President of the World Jewellery Confederation, signed a memorandum of understanding, in which the basic principles of future collaboration are set; both partners especially want to promote global trade with jewellery.

In addition, Messe München GmbH will become a regular member of the federation founded in 1926, to which almost 80 jewellery associations from more than 40 countries worldwide belong.

“The CIBJO is an excellent partner for promoting the internationalization of inhorgenta europe further,” according to Mr. Heusler. “We are looking forward to linking our joint activities and consequently opening the greatest number of countries possible to the global market.” To this end, there will also be the possibility for the CIBJO to hold corresponding events within the framework of inhorgenta europe in the future.

During a dinner together, Manfred Wutzlhofer, Chief Executive Officer of Messe München, together with Dieter Hahn, Chairperson of the inhorgenta europe Advisory Board, awarded Dr. Cavalieri honorary membership in the advisory board of inhorgenta europe.

The World Jewellery Confederation or Confédération International de la Bijouterie, Joaillerie, Orfèvrerie des Diamantes, Perles et Pierres (CIBJO) was founded in 1926 and has its main office in Milan. Its members include national jeweller associations from Australia to the United Arab Emirates.