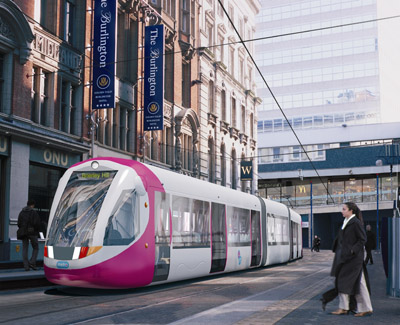 Trams are set to return to the streets of Birmingham after the Government approved Centro plans to extend Midland Metro through the heart of the city. The extension is well underway with the completion of the Great Charles Street Bridge linking the line from Snow Hill to its now on road route through Colmore Gate.

The exciting project also includes a fleet of new, bigger trams increasing passenger capacity and frequency of service to every six minutes throughout the day. The process of procuring these trams has now started.

The joint project by Centro, the Black Country and Birmingham City councils, is expected to boost the West Midlands economy by £50 million a year and create up to 1,300 sustainable new jobs.

It will revolutionise the way people travel to and around the city, giving a fast link between Birmingham’s two major rail stations, while delivering more than 3.5 million passengers a year right into the heart of the city’s shopping district, the new shopping on the Gateway development.

It will also provide a fast link from New Street Station to the emerging business district at Snow Hill, the unique and historic Jewellery Quarter and serve as a platform for a future rapid transit network that can connect and feed into the city’s forthcoming High Speed Rail terminus.

Major engineering work was carried out over the Easter period meaning there were no tram services operating along the whole line. Trams stopped running at the end of service on Friday 29 March and start running again at the start of service on Monday 15 April. A complete closure of the route was necessary for the engineering works to be carried out quickly and in a safe environment.

As part of the extension through Birmingham City Centre a new fleet of trams has been ordered to operate on the whole route. During the closure we will be modifying the platforms at all stops to accommodate the new trams. This work will enable the new trams to start running next year between Wolverhampton and Birmingham Snow Hill. Other enhancement works on the platforms will take place to improve their appearance.

Edit comment:
Many will remember that up to 1990 (covered in The History & Guide to the Jewellery Quarter) discussion was ongoing about what to do with the old railway track – could it be turned into a walkway/cycle route perhaps?

Then came plans to re-establish a train track and then to add a tram track alongside. Graves had to be moved in the cemetery to allow for the extra space needed. At first the proposed new ‘Hockley’ station was to be near to Icknield Street (the site of the original station) but The Hockley Flyer intervened and insisted that the station be sited in the heart of the Quarter at Vyse Street – and after a few heated meetings when we were told “It’s impossible”, we got our way! Then we asked for the name to be changed to ‘The Jewellery Quarter’ station and later named the line ‘The Jewellery Line’.

By the time the line was completed, the newly formed JQA officially ‘opened’ the station with the Lord Mayor and the Assay Office provided a new ‘stamp’. A ‘Welcome’ plaque was paid for by the JQA and Roy Hancocks was involved with the station clock which is in the shape of a steam engine. The first train to run on the line was photographed and featured in The Hockley Flyer.

This new linkup between Snow Hill and New Street is vitally important, especially since the 101 bus route was changed some years ago to ‘stop’ on the edge of the City Centre at Snow Hill (there was a free single-decker bus provided for a time but this disappeared) and the only way to get from Snow Hill to New Street to access not only the station but also the main shopping areas, the Chinese Quarter, the markets, the Back-to-Backs Museum and of course, the theatres, is to use a taxi or walk it.

In Vyse Street it is easy to tell when a train/tram has just arrived by the number of people around near to the station entrance. With parking expensive and difficult to find, it has been a boon for the workers in the Quarter as well as encouraging visitors.