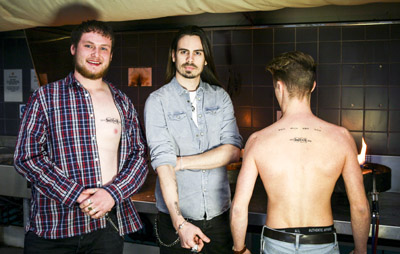 Three jewellery students in Birmingham had such an unforgettable time studying at University, they decided to commemorate their experience with matching tattoos of their institution’s hallmark.

Aaron Cumbers (21), Jordan Herry (23) and Ryan Howard (21) spent two years together on the Jewellery and Silversmithing HND at the School of Jewellery, part of Birmingham City University.

The School of Jewellery hallmark is usually stamped into finished works of gold, silver, or platinum produced in the institution, certifying their standard of purity.

Aaron Cumbers from Teignmouth in Devon said the hallmark tattoos perfectly expressed their time studying together: “We have shared some truly memorable moments together at the School of Jewellery, developing our skills and producing items that were the result of two years of blood, sweat and tears.

Being creative people, we thought what better way to commemorate our time and success here than with a tattoo – and no icon summed it up better than the School of Jewellery hallmark.

For Ryan and myself, it was our first tattoo. There were a few tender, wincing moments during the inking, but it wasn’t as painful as we both expected.”

Graduating in September 2015, Aaron and Ryan are now studying on the School’s Design for Industry course, a one-year top-up shaping contemporary designers for the jewellery and silversmithing industry.

Ryan Howard from Telford said their tattoos have stirred up quite a mix of reactions from friends, family and University academics: “We had our tattoos done at Vivid Ink in Birmingham.

They were very curious when three young men turned up requesting matching tattoos, which was something out of the ordinary for them. All of our friends on the Design for Industry course – most of whom we have studied with for three years – love our designs and I am sure there might be more to join us in getting one done! “It was a bit of a surprise for some of our family members, but I think they are used to us doing crazy new things now.

The trio appeared to have been inseparable during their time at University, with their peers giving them the moniker ‘The Three Musketeers’.
Jordan Herry from Bordeaux in France added: “For us, I think it is evident our time at the School of Jewellery has been most memorable and we wouldn’t have chosen anywhere else to study – the tutors and facilities are truly second to none.

It has been a hard course, but highly rewarding and we have had a lot fun along the way, and our tattoos sum all this up.”

Ryan and Jordan have already successfully landed jobs designing and manufacturing jewellery in Birmingham’s Jewellery Quarter, Europe’s largest concentration of businesses involved in the jewellery trade and which produces 40 per cent of all the jewellery made in the UK.

Meanwhile, Aaron is heading into the world of luxury product design and, along with Ryan and Jordan, they aspire to have their own design businesses in the future. In the meantime, Aaron and Ryan will be exhibiting their precious metal works in the final-year exhibition at the School of Jewellery in July.