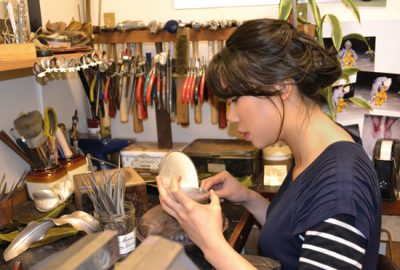 The exhibition ‘Studio Silver Today’ is a pioneering initiative by the Goldsmiths’ Company in collaboration with the National Trust to broaden awareness of today’s modern silver movement.

From March through to October 2011, visitors to the magnificent National Trust property of Kedleston Hall in Derbyshire will be able to admire silver creations by one of the country’s most talented young silversmiths, Theresa Nguyen.

The exhibition will take place in the columned central entrance known as Caesar’s Hall. 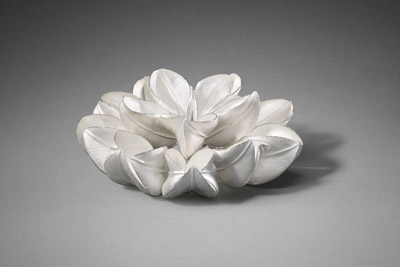 The same handcraft skills are used today as those that were used by the eighteenth century silversmiths represented at Kedleston.

There is a distinct difference however. Studio silver today is a true decorative art with creative work being produced by individual artist craftsmen, which is highly sought after by collectors and patrons.”

In addition to the exhibition of her work Theresa has agreed to be ‘silversmith in residence’ at Kedleston. On specified Saturday’s throughout the duration of the show she will be present to talk to visitors about her work and demonstrate her skills at a workbench set up within the body of the exhibition.

The Goldsmiths’ Company, who has sponsored the event, has also commissioned Theresa to make a contemporary tumbler, which will be the prize for a competition draw open to all visitors attending the exhibition.

Of Vietnamese origin, Theresa was born and grew up in the United Kingdom. Her grandfather was a gunsmith in Vietnam and it is from him that Theresa feels she has inherited her inventiveness, precision and a love of aesthetic detail. Theresa graduated in 2007 from the Birmingham Institute of Art and Design with a BA Hons in Jewellery and Silversmithing and now practices as a silversmith from her studio workshop in the heart of the Birmingham Jewellery Quarter.

With considerable vigour and tenacity, Theresa works silver sheets into exciting new forms, capturing softness and fluidity in a seemingly unmoveable material. Her inspiration comes from the mysteries and surprises of the natural world and she endeavours to transfer the gentle waves of life’s energy and movement into her silver objects.

Her constant exploration of fold-forming and hammering techniques result in sensuous surface textures and undulating forms. This is particularly evident in her “Parissa” centrepiece now in the Collection of the Goldsmiths’ Company which will be on display at Kedleston Hall.

The leaves of the Camillia Japonica were the starting point of this stunning piece which evolved from a series of models. The vessel itself started with multiples of small leaf shaped units which collectively form to become a complete whole.

Dating from some 250 years earlier, one of the highlights of the antique silver collection displayed in the dining room at Kedleston Hall is an ornate 18th century Rococo silver epergne of 1755. In contrast to Theresa’s work, it evokes a period when silver was acquired in the latest fashion, as ware for dining, judged by its weight and skilful manufacture rather than the artistic individuality of its maker.

The Studio Silver Today exhibition at Kedleston Hall follows on from a similar Goldsmiths’ Company exhibition and initiative which took place at another National Trust property, Dunham Massey in Cheshire in 2009 where silversmith Shannon O’Neil was the artist in residence. The exhibition was seen by 48,000 visitors, a figure which was up by a third on the previous year.

This increase can be attributed directly to the silver exhibition which engaged with the public at an immediate level. Its success has allowed the Company to continue this initiative at Kedleston.