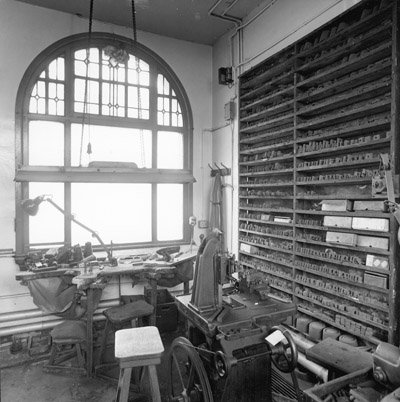 With 2012 being the Museum’s 20th Anniversary, we thought it a good idea to feature the Museum in this edition of The Hockley Flyer.

In 1992, a decision was made by Birmingham City Council to turn the Smith & Pepper works in Vyse Street into a museum to portray the history of jewellery making in The Jewellery Quarter.

The name originally chosen was ‘The Jewellery Quarter Discovery Centre’ and all signage, brochures and paperwork carried this name originally. However, at the same time, the Council were building their new ‘science museum’ intended to replace the renowned and much loved Museum of Science & Industry in Newhall Street which they had just closed down and decided they would name it ‘The Discovery Centre’ so, a new name had to be found for the jewellery museum.

‘Museum of The Jewellery Quarter’ was agreed upon and all signage, brochures, paperwork etc. were changed but then, the Council in its infinite wisdom, decided they didn’t want to use ‘The Discovery Centre’ name after all, and named their new ‘science’ museum ‘The Think Tank’ and they had to change their paperwork etc yet again – what a waste of time and money!

Although a lot of material, tools, machinery etc were already on site in the Smith & Pepper works, the Hockley Flyer was asked to help source more tools and other items suitable for the museum and to invite craftsmen to volunteer their expertise to make sure everything was authentic and to carry out demonstrations to visitors. 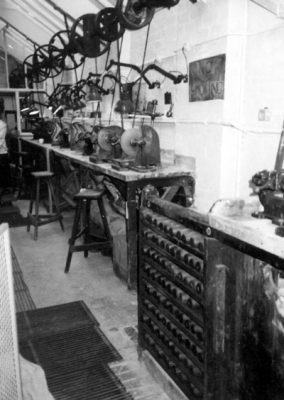 In 1899, Charles Smith and Edwin Pepper left Smith & Ewen to go into partnership as Smith & Pepper, registering their mark at Birmingham Assay Office on September 5th, 1899. The company’s address was 77-78 Vyse Street, then two terraced houses rented from the owner, Frank Moore, who was married to Charles Smith’s sister Jane.

Charles Smith and his wife lived at No. 77 for a time, and the first of their nine children, Charles Eric (always known as Eric) was born there in 1900. The single storey workshop at the back was built around the time the business started, on the former gardens.

From the beginning, Smith & Pepper specialised in gold bangles, cufflinks, lockets and crosses, and continued to make many of the same designs throughout their history, specialising in bracelets.

When they eventually had a telegraphic address it was ‘ARMLET, BIRMINGHAM’. By 1914 the business was doing well enough to replace the two old houses with a new front office block, linked to the old workshops at the back. The architect was a relation, G E Pepper.

During the 1920’s Charles Smith’s son Eric and daughter Olive joined the business. Their father retired in the early 1930’s and another son, Thomas, came into the firm to take over the jobs of running the workshop, smelting and making up alloys previously done by Charles Smith.

Charles Smith died in 1933 and Eric and Tom became the new partners with Olive continuing as company secretary. From time to time, especially during the war, some of the other sisters, notably Jessie and Hilda helped out but Eric, Tom and Olive were responsible for running the business. None of these three married, so there were no sons or daughters to carry on the business.

By 1981, in a difficult trading climate, the brothers and sister decided they had had enough, and the company ceased trading. Eric was then 81, Olive 78 and Tom 74.

The doors were then locked and the workshops lay silent and untouched for nearly ten years with the company’s papers and craftsmen’s tools left on the workbenches. As the Council was restoring the building, some 70,000 items had to be photographed, catalogued and removed for safekeeping, to be put back in exactly the right place after building work had finished, and what a wonderful job they made of it!

The adjoining building was turned into a visitor centre where displays tell the story of the Jewellery Quarter and introduce the raw materials of the trade – gold, silver and the skills of the jeweller. In the old workshops local trades people continue to demonstrate some of those skills, many of which have remained unchanged since man first began working with precious metals thousands of years ago.

Just a few years ago the Council decided to ‘close’ this award winning Museum during the winter and laid off the staff. It was The Hockley Flyer who intervened by tackling a prominent Cabinet Member who promised there and then to get the Museum re-opened within a few days, which he did!