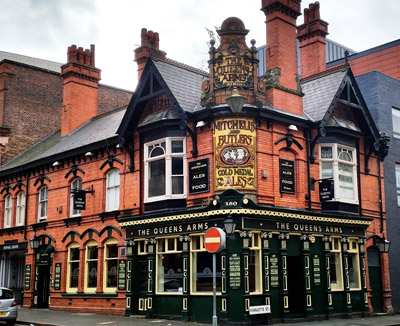 ‘Quiz Night’ is a new series for Sky 1 that will showcase the Great British quiz night in all its brilliant, quirky glory.

Each week will see four different teams in four pubs across the country playing the same quiz at the same time. It is a quiz show and an observational documentary rolled into one, described as ‘Gogglebox meets the pub quiz’.

The producers of the new show scoured the country to find the best pub quizzes and unsurprisingly The Queens Arms on Newhall Street in Birmingham city centre was chosen as amongst the very best.

It is already described as, “the best pub quiz in Birmingham” and the TV experts agreed. It is set to feature right from episode 1 when the series airs later this year.

On 4th September, Sky 1 will take over the regular quiz slot and The Queens Arms will join in a simultaneous televised quiz with three other pubs around the country.

Quizmaster Paul Barr has hosted the regular weekly quiz for the past 7 years and in that time, it has built a loyal following of eager quiz-goers. “Our regular players will play the quiz as usual so we’re hoping lots of them will come along”, says Paul, “the only difference will be that we’ll all become reality TV stars in the process.”

Plus its set to be an on-going thing as the series producers are already looking at dates to come back to film more episodes and follow a regular team throughout the series.

It is a major series for Sky 1, bringing real pub quizzes into people’s living rooms and allowing them to join in the discussions, debates, and probable arguments enjoyed by real life quiz teams.

The regular ‘Quiz at the Queens’ takes place on Thursdays from 8:30pm, details of additional filming dates will be announced through The Queens Arms Twitter feed as and when they are known.