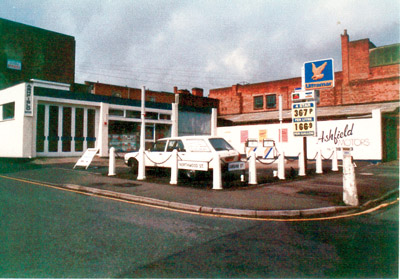 After 22 years trading in the Jewellery Quarter, Ashfield Motors, on Caroline Street is closing down.

“When I took over from the Holder brothers, Jack and Bob, on the 2nd January 1986 it was a very busy garage, dispensing fuel and repairing a wide range of vehicles.

Sadly time has taken its toll on the small independent garage and with petrol now over £1.00 per litre the cost of adapting the pumps is just not viable. So, with a heavy heart, I will be retiring.

Before the garage was built there stood a public house on the site. Confusion reigns about the name. Some people say it was called ‘The Blue Angel’, others say ‘The Jolly Roger’. Unfortunately during the Second World War it took a direct hit and was completely destroyed.

Apparently the steps into the pub where found in St. Pauls churchyard. Over the years weird noises have been heard when working on the premises, noises that could not be explained. This has led to much speculation as to what might be buried in the old cellars! 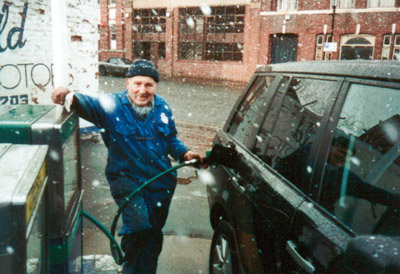 Fillin a car up in the snow!

Hopefully when the demolition of the garage takes place both the true name of the pub will be discovered along with an explanation for the strange noises. I shall follow this with great interest.”

(Ed: From our magic 1898 map we have discovered the pub was actually called ‘The Hope & Anchor’).

“During my time at Ashfield Motors many changes have taken place within the Jewellery Quarter, which in my opinion has enhanced the locality but sadly we have lost many of the older characters and businesses during this time.

On closing, I would like to offer my sincere thanks to all my customers both past and present for their custom and friendship and wish them all well for the future”