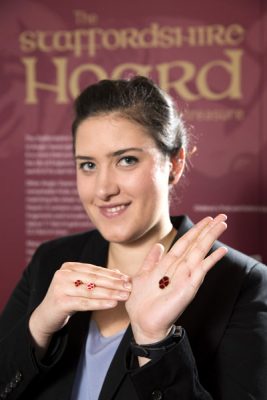 The Birmingham casting house and 3D printing specialist Weston Beamor has recently revealed a collection of jewellery based on ‘The Staffordshire Hoard’.

The Hoard is a collection of some 4000 Anglo Saxon treasure objects in gold and silver which was found in a field near Lichfield in 2009 and is now jointly owned by Birmingham and Stoke-on-Trent City Councils, and cared for on their behalf by Birmingham Museums Trust and The Potteries Museum & Art Gallery, Stoke-on-Trent.

The Weston Beamor jewellery, which is very contemporary in its feel, is made in silver gilt with rich red, cold enamelling and comprises a pendant and earring set with cufflinks planned to follow shortly.

The jewellery will soon be on sale in the shop at Birmingham Museum & Art Gallery at a carefully targeted RRP of approximately £75.00 for each item. 10% of all profits will go directly to supporting the on-going research work on the Staffordshire Hoard as well as the other work of the Museum.

The Museum will have exclusivity on the designs for the next six months but thereafter the Collection, which will be supported by point-of-sale materials explaining its provenance, will be made available to retailers countrywide on the proviso that they too make a 10% donation of their profits on its sale to the Museum.

“Our Hoard Collection was designed initially as part of a competition staged by the Jewellery Innovation Centre (JIIC) in Birmingham, in which students at the School of Jewellery were invited to put forward their designs with a view to the three winning pieces being made up for The Museum by one of three Birmingham manufacturers – ourselves, Hockley Mint and Fattorini,” explains Glen Day, head of business development at Weston Beamor.

Weston Beamor’s chosen design came from Natalia Antunivity, who is currently in her final year of a BA degree in ‘3D Design’. Her concept adapted a distinctive lattice work motif that appears across a number of objects in the Hoard and which is set with rich, red garnets to sumptuous effect.

This is not the first time that Natalia, who was born in Serbia but grew up in Hungary, has been selected for commendation by Weston Beamor. In her second year at University she won third place in the company’s annual design competition for BCU students.

“We judged these pieces purely on the commerciality of the designs the students had created and on how well we felt they echoed the beauty and craftsmanship of the pieces in The Hoard. It wasn’t until we had picked our winner that Natalia’s name was revealed. I understand she has also won a Goldsmiths’ Company Award for design this year so she clearly has real talent and I feel sure that her Staffordshire Hoard Collection will appeal not only to Museum visitors but also to jewellery lovers throughout the UK,” says Glen Day.