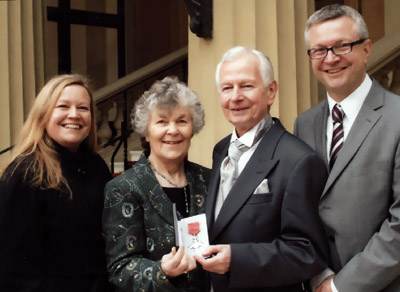 The Jewellery Quarter is justly proud of its museums and galleries and as they are voluntary organisations, wherever possible the Hockley Flyer helps them out (we now publish the ‘Friends of the Cemeteries’ and the ‘Pen Talk’ Newsletters).

The Pen Room (ground floor The Argent Centre) is the ‘brainchild’ of Brian Jones when, together with many dedicated friends and associates, he set out to commemorate the fact that at one time the Jewellery Quarter was turning out thousands upon thousands of pen nibs every day.

The Pen Room is unique and completely fascinating (its patron is Carl Chinn) yet it is surprising how few of the Jewellery Quarter workers and residents have ever visited the museum. Volunteers are always welcome: www.penroom.co.uk

The highlight of 2008 was the news that Brian Jones was awarded an MBE for his services to history, a well deserved award for all the work he has put into getting the organisation recognised.

Community Project:
‘Last summer, we completed our first community project with the women and children of St. George’s Church, Newtown, Birmingham; under the name of ‘Putting the World to Write’, the group was encouraged to try their hands at creative writing and calligraphy. With guidance from writer Steve Blundell, the group produced a souvenir bookmark. Feedback from the workshops was very positive and most of the participants are looking forward to the next project.

History Meetings:
There is a small history group that meets monthly at the Pen Room.

Calligraphy Competition.
‘On January 17th, we held the prize-giving for our annual calligraphy competition. This year, the themes were Jewels, the Olympics and the Environment. The competition was won by Linda Toft, whose piece was the Olympics; second place was Simon Daniel and third was John Griffiths, with Bill Platt
winning the Molly Davis Award for best newcomer.’

Visitors:
‘We were pleased to have a visit from Andrew Martyn Smith and his mother; the Martyn Smith family are descendants of Josiah Mason’s sister, Elizabeth, and had management positions in the company and in Perry and Co. Andrew now lives in Brazil.’

Martyn Smith with his mother, talking to Brian Jones at The Pen Room

‘Other notable visits included Andrew Mitchell, MP, and Roy Hattersley, the former MP, who was writing an article on the Jewellery Quarter. It was interesting to note his comment in the visitor book that he was unaware of the existence of the trade in Birmingham.’

‘Our main priority for this year is to ensure a regular source of funding and income. The donations we receive from visitors, although generous, falls far short of the £25,000 a year we need to keep the museum running’.

Improving benefits to the membership is also something we are looking at. We are currently exploring the possibility of offering members a ‘loyalty/discount card’ for use with shops in the Quarter. Any suggestions about member benefits would be most welcome as it would also help us to recruit new members to the organisation if they could see some benefits from joining the organisation’.

‘Also high on our list of priorities is increasing the number of school visits to the museum’.
‘Some beautifully lacquered nibs, made by Gillott, have been donated to us recently; they are unusual and quite rare. Other donations include a number of nib wallets and tooling for pen nibs from Baker and Finnemore; they were having a clear out and passed on any duplicate items they had to us. We have been extremely fortunate with generous donations from the public.’

‘Jackie Hancox has put on an exhibition in the Phillip Poole Room, to commemorate the bi-centenary of the birth of Louis Braille. This is a good opportunity to learn about this remarkable man and his invention that allowed visually impaired people to communicate’.

‘Also scheduled for this summer is a writing competition for schools; it will have a Matthew Boulton theme and will be part of the celebrations in the Jewellery Quarter to mark the 200th anniversary of his death’.

‘The museum has established itself as an attraction in the Jewellery Quarter and despite the current economic climate the number of visitors has been steady with a slight recent increase – half term was particularly busy. We have participated in promotional events outside the museum and have had two travel journalists visit us, one of them from Virgin Trains. The BBC will be filming the museum for a ‘Songs of Praise’ programme to be broadcast next February’.

Previous: Silver with a Pinch of Salt
Next: Be Aware – Duty of Care